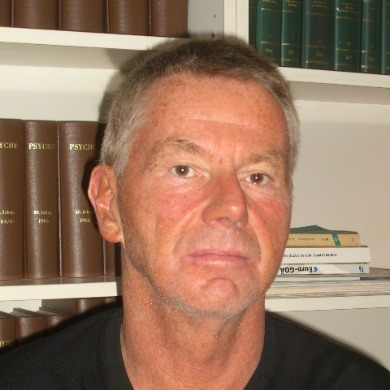 After finishing medical school and completing a dissertation in clinical neurophysiology about EEG in heart patients, Dr. med. Reimer Hinrichs received his specialization certificates in neurology, psychiatry, psychoanalysis, and psychotherapy in Berlin in 1984. He worked clinically in the psychosomatic liaison service of the Free University Hospital in Berlin, before he opened a private office in Berlin in 1988, with an accent on individual psychoanalysis. During that time, he completed additional training in acupuncture (1988) and clinical hypnosis (1998).

In addition to his office work, Dr. Hinrichs was also a consultant physician for the Berlin Association of Statutory Health Insurance Physicians (2000-2005) and the German Rent Insurance Company (2005-2006), mainly working on medical testimonials in administration, psychiatry, and drug dependency questions.

Since 1984, Dr. Hinrichs published numerous articles and gave different national and international oral presentations on the theory and practice of psychoanalysis, psychoanalytic victimology, and topics of psychosomatic medicine. His publishing work additionally includes seven monographs between 1987 and 2004. Dr. Hinrichs is a fellow member of the American Academy of Psychoanalysis and has been called a teaching and training analyst by the German Academy of Psychoanalysis and Dynamic Psychiatry, Berlin and Munich, in 2006.

Dr. Hinrichs has been a registered physician and psychiatrist in Great Britain since 2005, and, in the Netherlands since 2006. From 2006 to 2011, he was an associate and a directing psychotherapist at CURA, a Medical Supply Center in Berlin, dealing mainly with short-form individual psychotherapy and methadone substitution in polytoxicomanic patients. In 2011, Dr. Hinrichs opened an office for psychotherapy and acupuncture in Berlin.

International Society for the Study of Time